Campers who select hockey as their major at Kents Hill Sports Camp are on the ice for at least 13 hours each week. A hockey period consists of a combination of skills, drills, and game play. The difference between us and other camps that offer ice hockey is that we have a rink on-site. This provides campers more ice time, which allows us to offer more in-depth, comprehensive instruction on all facets of the game. All campers have their own locker so all of the equipment stays at the rink. In addition to the hockey periods every day, we also have off ice speed/agility training and hockey inter-camp vs. local camps.
The overall goal for the summer is to make sure each camper is getting the most they can out of their experience. We have worked with hockey players at every level. It is our goal that each camper will have an experience that not only will be fun but also help them develop into the player they hope to someday be. 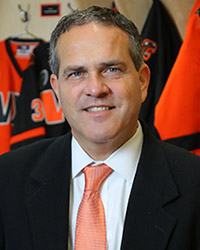 Mike is currently the Director of Hockey and Head Coach at North Yarmouth Academy, where he led his team to the Holt Conference Championship in 2018-19. A native of Rockport, Mass., Mike is a 1993 graduate of Iona College where he played forward and served as a co-captain his senior year when he received the “Pride, Hustle and Desire” award. His Collegiate coaching career got underway at his alma mater before accepting an assistant coaching position with the U.S. Military Academy at West Point for the Black Knights in 1999. After 4 years, Mike accepted a position as top assistant coach and head recruiter for the University of Alabama in Huntsville. Following a 7 year stint at Alabama, Mike returned as an assistant coach at the U.S. Military Academy for 2 seasons. Mike then spent 5 years as the director of hockey and head junior coach at Bridgton Academy in North Bridgton, ME.

**In order to play Ice Hockey at camp, campers need to select Ice Hockey as their major and bring all necessary equipment with them.**